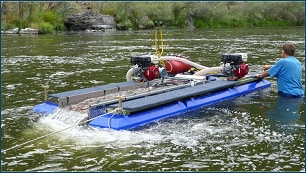 What Craig Colt has to say about these claims in Southern Oregon.

Home » Expert Opinions » What Craig Colt has to say about these claims in Southern Oregon. 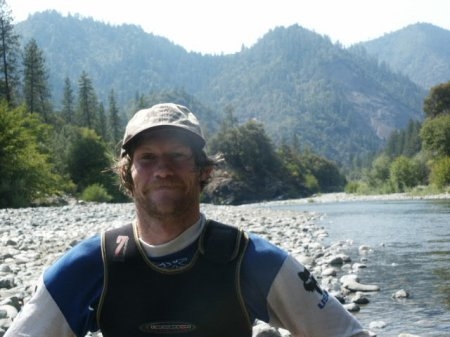 My name is Craig Colt. I have been a professional gold dredger for most of my adult life. I worked in Alaska for many years. But I have spent the last several years mining along mostly the Klamath River and its tributaries in Northern California where the weather is warmer.

My whole life is about gold mining. When I am not dredging or building mining equipment, I spend my time reading geology books and reading about mining history. I have read a lot about the mining history of Southern Oregon, especially of Josephine County, because that’s just on the other side of the mountain from where I am doing most of my own prospecting.

Since I am not located very far away from the area, Jason Inks asked me to go over and have a close look at six mining claims that he is about to put up for auction in Josephine County, Oregon. I went over there with a buddy in mid-January (2008). We managed to get onto each of the claims, even though some of them were above the existing snow line (we are having plenty of snow this winter down to 1,000 feet!)

In fact, we got the truck stuck in snow on one of the claims, and would have had to walk out if we had not brought tire chains with us!

Josephine County historically has been one of the richest placer gold bearing areas in the State of Oregon. In fact, it is an awful lot like our side of the mountain in Siskiyou County (California), with the same extensive gold deposits eroding off each side. There are old workings and mines scattered all over the place! You can see them on the maps.

The thing is that the old-timers did not have the technology available to allow them access to the bottom of the waterways in places where bedrock walls did not allow wing-dam mining. They had other limits, too. So a lot of gold was left behind.

Major flood storms which have occurred since the old-timers were around have since redeposited a lot of the gold they missed into the existing waterways, which makes for good high-banking, dredging and electronic prospecting. Some of the creek-bottom deposits remain in place, entirely virgin of any other mining activity; millions of years of natural erosion and concentration. The potential for fantastic success is incredible! 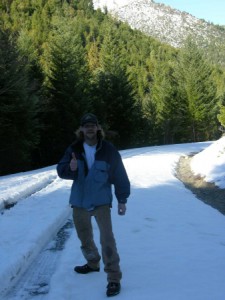 Since I was doing this for Jason, I took it upon myself to speak with a close friend who specializes in mining claim acquisition in Southern Oregon. In looking up the areas where each of these mining claims is located, it became immediately clear that the entire waterways are claimed from top to bottom. This does not happen unless people are recovering a lot of gold from those waterways! So these have got to be some pretty good claims.

One of the things my buddy and I noticed right off is that there are substantial signs of earlier mining activity by the Old-timers up and down these waterways. That’s always a great sign. Because most of the gold we find these days are from the newly-deposited pay-streaks in the very same places where the Old-timers did well!

These creek claims are in beautiful country. The scenery is breathtaking. My images don’t do it justice, because they were taken just after a snow storm. Sorry about that. It’s the best I could do in the winter.

Anyway, my take is that every one of these claims is just the right type of place for beginners and perhaps less-experienced prospectors to get started and build up some experience in a gold-bearing location that might not be too hard to mine. It’s nice to be able to get on bedrock without having to dig or dredge very deep! Experienced miners might do really well on these claims!

Camping is close to the mining on each of the claims, so you don’t have to go very far. That’s always nice.

Those are some really valuable claims! I wish I had them for myself when I was just getting started!